Science & Hi Tech: Next US Mars lander gets go-ahead

The US space agency (Nasa) has given the green light to Phoenix, its next mission to land on the surface of Mars.

The announcement allows project team members to proceed with preparations for launch of the spacecraft in 2007.

The lander will touch down in Mars' northern polar region to explore its climate and geology and to look for signs of life, past or present. 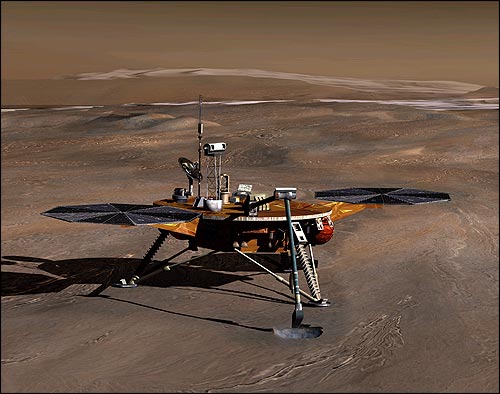 Its robotic arm will dig down to the Martian ice layer and deliver samples to the lander's deck for analysis.

The principal scientific investigator on Phoenix, Peter Smith, said the mission "may eventually lead to discoveries relating to life on our neighbouring planet".

If the spacecraft launches as planned in August 2007, it will embark on a relatively long cruise period, arriving at Mars in May 2008.

It is due to carry scientific operations for three months on the Martian surface. Phoenix will be stationary on Mars, in contrast to Nasa's roving robots Spirit and Opportunity.

The mission is so-named because it carries with it the legacies of two earlier, failed, attempts to explore Mars.

The lander was built for the Mars Surveyor mission originally planned for 2001, but mothballed by Nasa's administration in 2000. And many scientific instruments for Phoenix were built or designed for Mars Polar Lander which was lost as it entered the Martian atmosphere in 1999.

The 2001 lander is undergoing modifications to improve the spacecraft's robustness and safety during entry, descent, and landing.

The go-ahead to proceed with launch preparations follows completion of a critical review of the project's planning and preliminary design.

The project is the first of Nasa's relatively low-cost "scout" missions.