A full scale emergency operation is under way to rescue a Canadian submarine drifting without power 120 miles off the Irish Republic's coast.
Two Royal Navy frigates and a Royal Fleet Auxiliary tanker are due to reach HMCS Chicoutimi on Wednesday morning.
High winds and heavy seas have so far hampered rescue efforts, after a fire on board injured nine crew on Tuesday.
The submarine was travelling to Canada after being handed over to its new owner by the Royal Navy on Saturday.
The injured crew members are being treated on board for smoke inhalation.
An Irish ship attempting to reach the vessel was earlier forced back by the bad weather.
An Irish Defence Forces spokesman said its vessel LE Roisin had suffered damage in heavy seas and had to head back to port.
The Royal Fleet Auxiliary's Wave Knight, as well as Navy vessels HMS Montrose, from Faslane on Scotland's west coast, and HMS Marlborough, from Devonport in Plymouth, are on their way.
They will be joined by two tugs.
They will have to battle formidable seas, with six to eight metre-high waves and winds of 35 knots.
A Royal Air Force Nimrod from Kinloss has also been sent to the area and a Royal Navy Sea King helicopter sent from HMS Gannet in Ayrshire. 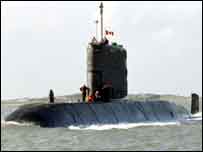 'Communications difficult'
An RAF search and rescue helicopter is on standby at Ballykelly in County Londonderry as is a Royal Navy helicoper in County Donegal, in the Irish Republic.
Royal Navy spokesman Mike Finny said rescue crews were "endeavouring to reach the submarine as quickly as possible" in the face of "extremely bad weather conditions".
"The submarine is not at any immediate risk at the moment," he told BBC News.
"Communications with the submarine are reasonably difficult at the moment, so we're still at the stage of actually compiling a picture of what's going on."
The Navy would have a "better picture" when its frigate HMS Montrose arrived on the scene later in the morning, he added.

A Canadian Navy spokesman said the sailors were "getting tossed to and fro something crazy."
The source of the fire is said to have been an electrical panel in a corridor.
The Ministry of Defence said there were no plans to remove any of the 57 crew from the Chicoutimi, which will be towed back to its starting point in Faslane.
The alarm was raised by the captain of the submarine, which is not nuclear-powered or carrying nuclear warheads, shortly after 1500 BST on Tuesday.

The Chicoutimi was originally built for the Royal Navy, when it was known as HMS Upholder.
It was bought by the Canadian Navy, where it is now one of four Victoria Class long-range patrol submarines. All are said to have had technical difficulties.
The Times had reported previously that Canada was considering legal action over the ships.
The Chicoutimi was on its way to Halifax, Nova Scotia, after leaving Faslane.

This is the second time in a month the Chicoutimi has been involved in a rescue at sea.
Last month, she was involved in an incident when an ocean-going tug boat accompanying it ran aground off Skye during sea trials.