A ship's technician has flown the flag for Wales not only thousands of miles from home, but deep under the sea.
Leighton Rolley, from Cardiff, used a robot to raise the Welsh dragon some 3.5km (2.2m) below the surface near the Galapagos islands in the Pacific Ocean.

He normally operates the robot to help scientists understand the Earth's crust and gather rock samples.

The unfurling was witnessed by Dr Chris MacLeod from Cardiff University. 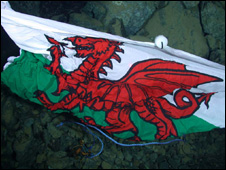 The Welsh flag was unfurled at the bottom of the Pacific Ocean
The school of earth and ocean sciences lecturer was on board the RRS James Cook ship as part of a Cardiff University research project to look at plate tectonics around the Galapagos Islands.

Mr Rolley, who works for the Natural Environment Research Council (NERC) which manages RRS James Cook, described the delicate matter of unfurling the flag remotely as one of the most memorable moments of his career.

"As the cruise was sponsored by Cardiff University it seemed a good idea at the time," he said.

"But I don't think many people will be bumping into the flag any time soon. Some submersibles can carry a person to that depth but I expect the next people to see it will be those like us remotely controlling robots on research ships."

The flag had previously been raised above the ship and its journey to the bottom of the sea has been recorded on Mr Rolley's website.

The ISIS deep sea robot is normally used to grab rock samples from the sea bed. A camera is also fitted on to it so scientists can watch what is going on in the sea.

The submersible, which can dive to around 5km (3.1m), also has a rock drill to help recover deeper rock samples.

The research carried out by Dr MacLeod and others on RRS James Cook will help scientists understand how plate tectonics move.

RRS James Cook has been described as the "world's most advanced research ship" by NERC and is also used to monitor climate change, carrying scientists to remote corners of the globe.