Canada is a modest and unassuming place when compared with its great big neighbour to the south. But now it has plenty to boast about: world-beating oil reserves in Alberta which are finally being brought into production after decades of talk. 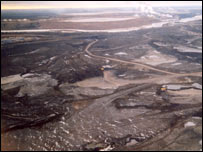 Alberta is experiencing a huge and expensive oil rush, and Fort McMurray is at the centre of it.

The town is an old trapper post, with no road until the 1960s, though it had a railway. Fort McMurray's population is now a runaway 68,000, and climbing all the time.

For 30 years I've heard about the promise of the vast Alberta oil sands area, ever since the Opec oil crises of the 1970s, when oil suddenly became worth much more than two dollars a barrel.

But decade after decade, it was only a promise of oil to come in Alberta.

The oil is bound up in black bituminous sand close to the surface. But even though the reserves are so huge and so obvious the oil sands have to be steam heated to release the oil.

Until very recently, it's been a prohibitively expensive process - but suddenly, with the world oil price well above $30 and now routinely above $60, Alberta oil is worth winning. 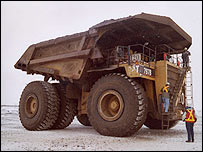 A recent recalculation has revealed that the amount of oil buried underneath the ground in Northern Alberta was not millions of barrels - but trillions. Alberta's internationally recognised reserves are now put at 175 billion barrels of crude. Only Saudi Arabia has bigger reserves.

So now mighty corporations are pouring billions of dollars into the area around Fort McMurray.

In a chilly wilderness where the mercury sometimes freezes, under the brilliant illuminations of the Aurora Borealis, the northern lights, huge excavators are scraping off the topsoil and dumping the sticky sands underneath into the biggest dumper trucks in the world.

The next stage is a towering plant to liquefy the sludgy bitumen and create crude oil that can be pumped hundreds of miles in pipelines to the refineries.

Back to the wilderness?

And these deposits are guaranteed to last for decades, if not centuries.

Flying in a helicopter over the oil sands area, you can see for fifty miles, and know that somewhere under the surface peaty, boggy "muskeg" as the Canadian call it, oil sands stretch out almost forever.

This oil belongs to the Province of Alberta. It is making it rich: a big place with a small population of three million people. Alberta has paid off its debts and has such a budget surplus already that it has just given every provincial taxpayer a rebate cheque for 400 Canadian dollars, about £200, as a sort of New Year present.

But this is wilderness: haunt of the bear and the buffalo and the caribou and the moose. The oil companies are promising to restore the land to what it looked like before, shifting back the washed sand minus oil of course, covering it with muskeg, and replanting the scraggy trees.

Environmentalists (and the native First Nation people) are not so sure that virgin wilderness can really be recreated; the jury is still out.

And this is happening a long way from almost anywhere.

To get some perspective on all this, I drove out to see a couple who have known Fort McMurray for more than 70 years. Over a cup of tea, Bill Woodward was soon showing me how to jump aboard a moving train without losing a leg in the process. 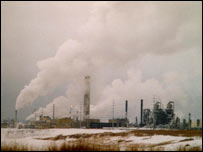 Our conversation took place in a snug little lakeside cabin which the ex-hobos, Bill and his wife Nancy, have lived in since he came home from the Second World War.

Until the road came, they used to go shopping in the winter with a dogsleigh. It was the frontier life Canada's original settlers must have experienced: trapping, fishing, living off what you could snare or shoot.

His son Rowland listened to us discussing the past, and then he said this, with quiet pride: "Our people were not only buffalo hunters but also fishermen. There are communities here that are more than 14,000 years old.

"Three hundred years ago when the American trader Peter Pond came through here, he sat on the banks of the Athabasca and the Clearwater rivers and saw the local people (the Cree Indians) taking the bituminous sands and put them in a pot of hot water and then they'd skim off the pitch and use it to waterproof their canoes.

So much has changed in the Alberta wilderness, so much remains the same.