One of the tugs holding the stricken cargo ship Hoegh Osaka in the Solent has crashed into the vessel.

The tug moved from its position during high winds and collided with the ship on Saturday afternoon. No-one was injured but the tug was damaged and had to be replaced. The salvage operation was hampered on Saturday because of poor weather conditions but the Maritime and Coastguard Agency (MCA) said salvors had since managed to board the ship. The Svitzer salvage team is said to be refining its plans because further high winds are predicted. The MCA said salvors were now intending to start work on the ship's ballast before pumping the 3,000 tonnes of water out of the vessel. A spokeswoman said: "Yesterday, weather conditions prevented any activity on the vessel other than to connect the third tug. 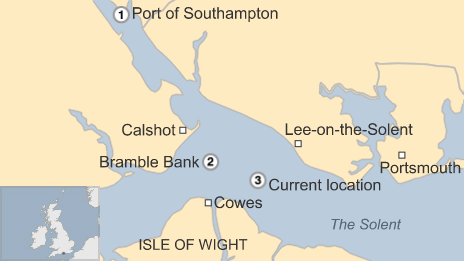 Unfortunately, during the afternoon, one of the two tugs already in place moved from her position and collided with the Hoegh Osaka. There were no injuries to personnel, but the tug received some damage and it was replaced by another tug. No pollution occurred during this incident.

The Singapore-registered transporter set sail for Germany at about 20:20 on Saturday 3 January, shortly before being deliberately run aground by the crew when it started to list. There were 1,400 cars on board, including 1,200 Jaguar and Land Rover vehicles and 65 Minis, as well as 105 JCB machines and 500 tonnes of fuel.

The 51,000-tonne vehicle transporter "refloated" itself unexpectedly at 14:00 GMT on Wednesday due to the high tide and it was towed two miles east of Bramble Bank, where it is anchored. High winds of up to 83mph on Friday night caused the vessel to drag anchor for approximately 100 metres. Salvage company Svitzer described working conditions on board as "difficult".

The Queen's Harbour Master has introduced an exclusion zone of 984ft (300m) around the vessel, currently held by tugs between Cowes and Lee-on-Solent.