Fishermen are hoping for a finder's fee after netting a mini yellow submarine seen floating near a Scottish island.
The remotely-operated vehicle (ROV), which is used to detect mines, is 10ft long and weighs 850kg.
It was spotted by fisherman John Baker off Islay after apparently breaking free from a Royal Navy ship. It was towed to Port Ellen, hauled ashore and taken to a "safe place" by locals who say they are waiting for the navy to come and claim the vessel.
Mr Baker's brother-in-law, Harold Hastie, said the vessel had been found floating about three miles from the Mull of Oa. 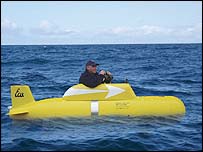 Lifting gear
His relative called him and started singing "We're all living on a yellow submarine" before explaining what had happened.
As Mr Baker's creel boat did not have the lifting gear needed to get the craft ashore, Mr Hastie went down to help.
"I fish scallops and have a winch and heavy lifting gear, so John towed it back to Port Ellen and then we transferred it.
"We lifted it out of the water and onto my own vessel and I got a friend who has a haulage business to take a digger down to the pier.
"He lifted it off my vessel and onto the pier and we took it away for safe keeping," he said.
Mr Hastie, who is a member of the local coastguard, contacted his colleagues at Clyde Coastguard to explain what had been found.
They passed the details on to the Faslane Naval Base, but were initially told that no submarines were missing. 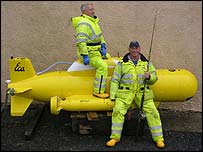 The navy later admitted that one of its vessels was missing.
However, Mr Hastie said the navy had not been in touch with either of the two men to thank them for what they had done.
"You would think they would have phoned up and thanked us because it is quite an expensive piece of kit to leave lying about.
"It took quite a bit of organisation to get it out of the water and haul it onto the pier."
Mr Baker said he was hoping to receive compensation from the navy, although he said: "We are not going to claim vast amounts."
He added: "I have never seen anything like this floating about before.

Loss reported
"You see the odd fridge and things, but not wee submarines."
A Royal Navy spokesman told the Scotland on Sunday newspaper that the loss of the vessel had been reported within an hour.
However, he said the message did not reach Faslane until a week later.
"We are conducting a investigation into what went wrong," he added.