Electricians prefer to keep power cords dry as a rule. But in Monterey, California, scientists and engineers are hopeful that immersing electrical cable off the coast will profoundly improve how the oceans are studied.

This week, a team from the Monterey Bay Aquarium Research Institute (MBARI) will lay 52km (32 miles) of electrical cable from a research station on shore to a shelf 900m (3,000ft) below the sea's surface.

The thick cable will send power to, and return data from, a variety of research instruments - to be added later this year - that will sit on Smooth Ridge, a plateau at the edge of Monterey Canyon, the largest and deepest submarine canyon off the continental West Coast.


After years of planning, it is the first real step in the building of the $12m Monterey Accelerated Research System (Mars), a pioneering underwater observatory that will influence the construction of similar networks elsewhere in the ocean.

Mars frees scientists from the limitations of batteries and hooks them up to fibre optics. They will be able to conduct experiments and communicate directly with underwater machines, then monitor the results in real-time from PCs on shore.

When this computer revolution finally takes a dive, measuring carbon cycles, collecting microbial DNA and spying on bashful marine organisms will be as easy as hitting "enter" on a keyboard.

Click here to see a map of the cabled system 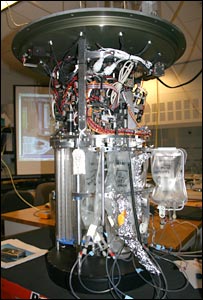 "We're taking the enormous communications and power infrastructure we have on land and extending it to the deep ocean," said Dr Jim Bellingham, director of engineering at MBARI.

Mars is the first deep-sea observatory off the continental coast, and the first designed for wide-ranging oceanographic research.

It is the American contribution to an international effort to develop permanent ocean observatories.

The site is in deep water but close enough that scientists can make short trips by ship to plug in new instruments and test the concept for more remote, expansive cabled observatories, such as Neptune on the Pacific Juan de Fuca plate, and others off the Canadian and Eastern seaboards and possibly the Arctic.

"This is at the cutting edge of what people have tried in the oceans," said John Delaney, director of the Neptune programme at the University of Washington.

"We're at the early stage of learning how to interact with the ocean remotely, as if we were virtually there," he told BBC News.

Much of the deep ocean is opaque to our senses; radio waves quickly attenuate. For this reason, we know more about the far side of the Moon than we do about much of the deep sea.

But while the vast majority of it remains unexplored, we know the ocean plays a critical role in climate regulation because of its ability to store heat and sequester carbon.

It is also host to other environmental problems, such as the decline of fisheries and the bleaching of coral reefs.

The ability to set instruments on the seafloor and leave them running indefinitely will allow scientists to monitor the ocean continuously, rather than rely on time-consuming and inefficient trips out to sea.

"We use ships a lot and might visit a certain region of the seafloor only once in our lifetime. It's a very limited way to study the ocean," he said.

"Cabled networks are an opportunity to go out to the exciting and interesting parts of the seafloor and monitor them over long periods of time."

But before underwater computers can boot up, they have to be plugged in.

The main Mars cable - most of it is buried in the seafloor to minimise disturbance to marine life - will connect later this year to a large central hub, or node, on Smooth Ridge.

The hub is similar in function to an office multi-plug power point, but the size of a small car and weighing six tonnes.

Eight extension cords will radiate from ports on the hub, with connectors at their tips. The connectors function much like wall sockets and internet portals where scientists can plug in science experiments.

Among the first to be hooked up will be "Eye in the Sea", a low-light camera on a tripod designed to observe bioluminescent creatures, such as lantern fish and anglerfish that flutter away from divers and loud submarines. 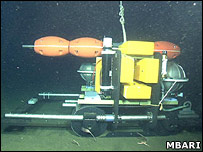 Attached to a neighbouring port, the Benthic Rover will roll along the seafloor and measure the metabolic activity of marine creatures that dine on the carbon found in marine "snow", the organic detritus falling through the ocean column.

Scientists know little about the carbon cycle in the deep ocean.

"This is a place where we desperately need new methods for access," said Dr Bellingham.

"Most of what we don't understand about the long-term climate changes revolves around the ocean's role."

Later this year, a remotely operated vehicle (ROV) will begin to plug the instruments into the ports. A human pilot, using a joystick and the ROV cameras as eyes, will guide the robot's mechanical arm from the ship above.

If you find connecting a desktop computer to the network frustrating, imagine doing it in water, under 17 megapascals (2,500 psi) of pressure, and in the dark.

"It's like trying to fix your PC wearing a pair of mittens, while looking at it with binoculars," said Mark Chaffey, Mars lead engineer.

There is also the matter of 10kW of electric current coursing through the water.

The instruments have electrical prongs that plug into the extension cord connectors. The connectors eject interstitial muck or salt water and replace it with oil, which does not conduct electricity.

"Once that's complete, electrons can flow without shorting out to the salt water on the other side," said Andy Hamilton, a mechanical engineer at MBARI.

Scientists see Mars as a proof of concept and the beginning of a new kind of ocean bottom observation.

"A decade from now there may be as many as 10 major undersea cabled networks around the world," said Dr Delaney. "Mars is the first, not the last."