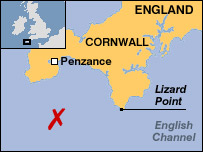 Two bodies have been recovered from heavy seas after a French trawler sunk off the Cornish coast.

Two coastguard helicopters, two RNLI lifeboats and various other vessels joined the search for the Bugalde Breizh, which went down 14 miles south west of Lizard Point.

Falmouth Coastguard picked up a distress beacon at 1238 GMT from a French trawler.

It was quickly followed by a warning call from a second French fishing vessel, which reported seeing the unnamed French craft go down.

A rescue helicopter from the RNAS Culdrose, near Helston, was on the scene by 1320 GMT.

Martin Collins, from the Maritime and Coastguard Agency, said: "I can confirm that an RNAS Culdrose aircraft airlifted two bodies from the water.

"At this stage they are believed to be dead."

The bodies were flown to the Royal Cornwall Hospital in Truro by the aircraft, which refuelled and resumed the search for the other crew members.

The spokesman said that two empty life rafts had been spotted at the scene and helicopter crews had also reported being able to see the hull of the boat in the water.

An RAF rescue helicopter from Chivenor was also sent to the scene, as well as the Lizard and Penlee lifeboats, and the coastguard emergency towing vessel Anglian Princess.

A number of fishing vessels have joined the search, along with a Dutch submarine, numerous commercial ships and a car carrier.

Warship HMS Tyne is also on the scene, acting as the co-ordinating vessel from Falmouth Coastguards.

Swells of up to 25 feet high have been reported in the area and winds gusting to 48 knots.

Rate This
Article Rating
Please take a second and vote for this article:
Average Score: 4  Votes: 1