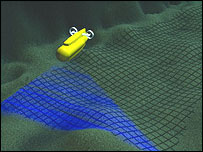 When Jacques Piccard and Don Walsh dived into the Marianas Trench in 1960, their visit was brief - just long enough to watch a flatfish skim the seafloor, exclaim their surprise at seeing life thrive at such depths, and make history as the first humans to touch the deepest part of the ocean.

After 20 minutes they returned to the surface. Their bathyscaphe, Trieste, had no camera when it touched bottom so there is no visual record of what the men saw there; the little flatfish was lost to posterity. Humans have not returned to the Marianas Trench since.

HROV will operate remotely and tethered

It was lost in the spring of last year. But soon a robot will take the plunge again.

A novel underwater vehicle, the Hybrid Remotely Operated Vehicle (HROV) under development by the Deep Submergence Laboratory at Woods Hole Oceanographic Institution (WHOI) and Johns Hopkins University, will be able to reach the deepest parts of the world's oceans and perform a variety of tasks such as photography, biological sampling and topographical mapping.

The hybrid will operate in two modes - as a Remotely Operated Vehicle (ROV) with a lightweight micro-cable so scientists can receive data and communicate with the craft in real-time, or as an autonomous vehicle pre-programmed to collect data in wide-area surveys for later analysis.

Free-swimming will allow the HROV to dive in previously inaccessible areas, such as beneath polar ice where tethering cables get in the way.

A thin filament of micro-cable will allow the craft to go deeper without the drag caused by heavier cables typically used for power and communications in ROVs.

Batteries will keep the HROV humming along for 36 hours - plenty long enough to snap local flatfish and other surprises with on-board cameras.

Its capabilities will allow American scientists to plumb the bottom of the Marianas Trench - two kilometres deeper than Mount Everest is tall - one of the most active earthquake zones on Earth and interesting for the subduction process that created it.

The HROV will be launched without the specialised ship used by other ROVs, which lets scientists send it out more quickly, immediately after an earthquake or volcanic eruption, for example.

"We're on the verge of a new era of ocean science," James Yoder, the director of the Division of Ocean Sciences at the National Science Foundation told an audience at the recent meeting of the American Geophysical Union in San Francisco.

Woods Hole has not yet retired Alvin, the famed sub that has been the workhorse of manned dives, but it is depth-limited to 4,500 metres and US ocean research has increasingly turned to unmanned vehicles that can survive the extreme conditions at a fraction of the cost.

While the oceans cover two-thirds of the planet, the vast majority - 90% - are unexplored.

We have better maps of Mars than we do of our own seabed, oceanographers say.

But according to Professor Chris German, from the Southampton Oceanography Centre (SOC), UK, new underwater technologies will extend scientists' reach - soon - to all areas of the ocean floor.

"You could say that deep-sea exploration is the new space exploration," he said.

And, as in space missions, robots are sometimes the best bet in extreme environments.

"There's a limit to how long you can keep someone trapped inside a steel sphere at several thousand metres underwater," said Dr German, whose personal limit is about eight hours.

"Only in the last couple of years has robotic technology been good enough that it could do most of what a manned sub could do."

The HROV is one of several new deep divers under development or newly operational that will allow American and British oceanographers to reach and explore the most remote areas of the ocean for the first time.

Scientists hope to launch the HROV in three to four years. Meanwhile, SOC oceanographers are anticipating the maiden voyage of Britain's first deep-sea vehicle next spring.

Isis is the twin sister of Jason II, the ROV developed and put in service last year by Woods Hole. It is the first deep-diving craft for Britain, a country with a long history of marine science.

"We pretty much invented oceanography back in the 1800s," said Dr German, "and the one thing we haven't had previously was our own submersible vehicle to dive to the seafloor." 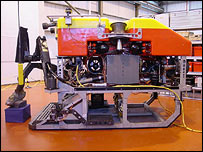 The unmanned, tethered Isis and Jason II dive to 6,500 metres.

The cable transmits power and receives data from video cameras and side-scan sonar.
Isis is tentatively planned to head for the TAG hydrothermal field in March, according to Dr German. The TAG is one of the largest seafloor deposits located in the rift valley of the Mid-Atlantic Ridge. The depth range of the ROVs takes them to 98% of the ocean bottom. The deepest 2% will be covered by HROV.


"That last 2% is very important," said Dan Fornari, chief scientist of Deep Submergence at WHOI. "It happens to include some very interesting environments in the deep ocean trenches, principally those that encircle the Pacific... and it's the only place where you can really get a sense of what's going on in the mantle and how the mantle is interacting with the down-going oceanic lithosphere."

The lithosphere - the outer, rigid shell of the Earth - is recycled at the Marianas Trench.

Subduction forces one plate to dive beneath the other deep into the Earth's interior, carrying with it raw materials from the seafloor into the underlying mantle.

Nicknamed "the subduction factory" - its product includes mud-oozing and gas-seeping mud volcanoes - the trench is one of a series where the process is visible to scientists.

The HROV missions will inevitably provide new insights into the geological and biological activity there.

"We're trying to understand the entire cycling in the subduction factory," said Patricia Fryer, a planetary scientist in the School of Ocean and Earth Science and Technology at the University of Hawaii.

"We find that the biological communities that are living on the mud volcanoes are dependent on the chemical reactions that are going on there, and all of this is interrelated with the tectonic activity."

The opposite crustal activity, occurring in the Mid-Ocean Ridge system where the Earth's crust spreads apart, is a fascinating but vastly under-explored area for oceanographers.

The ridge winds like a football seam 50,000 km around the globe, burping up new oceanic crust and fluid through lava volcanoes and hydrothermal vents.

Its most famous residents may be gigantic tube worms, seen waving to cameras from the porches of their hydrothermal homes.

They were discovered in one part of the eastern equatorial Pacific. But other species exist in the North Atlantic and, according to Dr German, 30-40 thousand km of the ridge remains unexplored.

But what has been explored has yielded more than 100 new vents in the last 25 years.

"In fact the level of discovery has been sustained so that over the last 25 years, on average, we've found one new species every two weeks."

The exploration may also reveal clues as to where life began on Earth.

Some biologists have suggested life began in the chemical brew at hydrothermal vents, but others believe the temperatures were too hot for progenitor molecules to remain stable long enough to develop into living cells, said Dr Fryer.

An alternative theory suggests that life began in the subduction zones.

"The reaction that takes place there releases hydrogen and hydrogen is like candy to these microorganisms," added Dr Fryer.

"So it's possible that in those cooler environments where the plates are converging... you might have the early history of the Earth."

Early life then would have been under as much pressure as scientists who are attempting to build the world's deepest diving robot.

At ocean bottom the squeeze is 16,000 pounds per square inch.

"It's like hundreds and hundreds of elephants all standing on your toe," said Dr Fornari, adding, perhaps unnecessarily, "It's brutal."

Engineers have little latitude to make mistakes on the HROV design, or the craft will implode.

"To design and build a system for 11,000 metres of water represents a significant engineering challenge," said Andy Bowen, from WHOI's Deep Submergence Lab.

"It requires us to develop components that don't presently exist."

Scientists are developing materials for the body of the HROV and the housing that contains the electronics. Titanium was used for Jason II, but it is not the solution for a craft diving twice as deep.

"You could make something five inches thick out of titanium and it would be able to stand the pressure at 11,000 metres," said Dr Fornari, "but it is going to weigh too much to be put on a vehicle that is battery powered or autonomous."

Some sort of ceramic that resists pressure efficiently would likely be used, said Dr Bowen. The lightweight communications cable will also ease the craft's load.

The complex cables typically used with ROVs are heavy.

"Even if you get down to 11,000 metres, you have so much drag on your cable, you can't move your vehicle," said Dr Fornari.

Cable drag slowed the Japanese Kaiko when it reached the seafloor and scientists believe that they lost the rover when the cable snapped.

Thin strands of optical microfibre less than a tenth of a centimetre (0.03 inches) in diameter replace the much thicker cables on traditional ROVs.

The US Navy developed the hair-thin cables for use in torpedoes and other underwater systems, and they are used only for telemetry.

"The HROV will have batteries, so you can get by with this thin link and go deeper and farther."

Forty years ago the public's first by-proxy voyage to the ocean bottom relied on the visual memory of two men. Today, a thin filament will give all those who remain above water a chance to dive with the robot.

The universe below may finally be giving up its secrets.

"In 1960 two people descended to the bottom of the ocean and peered out of a window and observed the environment," said Dr Bowen.

"Now the hybrid vehicle will give a large number of people a telepresence... and let them observe and help direct the research taking place."

Rate This
Article Rating
Please take a second and vote for this article:
Average Score: 3.5  Votes: 4